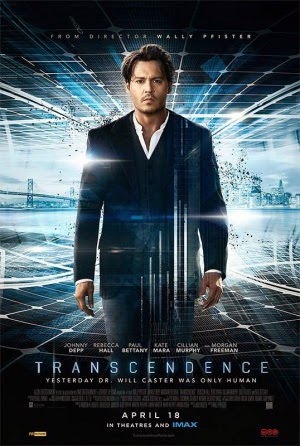 Conceptually, there's a lot to like about "Transcendence." Johnny Depp plays Dr. Will Caster; a scientist who falls terminally ill from an assassination attempt. In order to save his life, his wife Evelyn Caster (Rebecca Hall), uploads his consciousness into a supercomputer. Along the way there's themes regarding Transhumanism, the destruction of environment at the hands of human beings, and the idea of human passivity due to technological advances (think "Brave New World"). Couple  to boot, "Transcendence" is nearly 2 hours long, which one would think give it time  to have a proper narrative that fleshes out its ideas.

Instead, "Transcendence" has a dull narrative, laughable sub-plots, and very little else going for it. The themes of "Transcendence" are never really tackled in a serious manner but are always presented by a singular line from a character. The socio-political element of Transhumanism is for the most part are ignored, while the rest of the themes are always contained to the film's main cast, which arguably break down into two parties of, "Yes, technology is the right step in human evolution," and "No, it's not." There's only so much back and forth that can go on before audiences begin to question whether the script contains any serious dialogue that goes in depth. No one is asking for Plato's "Republic," but the exchanges in philosophical ideas between the two parties are extremely watered down and rather weak. The neo-Luddites of the film never present valid reasons for why they're so against Caster's "evolution", other than their personal distaste for it. Evelyn Caster herself is only for it because it's in her personal interests. There is another member of this party, however, and it's the film's plot itself. The actual "dangers" of Caster's revolution are always implied but never seen. If anything, "Transcendence's" script reinforces the idea that we should all become digital consciousnesses.

Despite its weak elements, Depp should be praised for his character as a digital intelligence. Playing a role similar to Scarlett Johansson in last year's "Her," Depp is able to move away from the more zany roles he is now known for. While the character's physical body is there for some parts of the film, most of Depp's acting comes from his voice-inflection and emotional reactions via computer screen, all extremely convincing.

Rebecca Hall gets the majority of the screen-time and while the character she plays has an extreme relevance within the film, Evelyn Caster herself is nothing more than a plot-device to drive the film forward. The character is too passive, and the script never gives any actual insight into who she is. There's little to know about Evelyn other than the fact that she loves her husband, a lot.

Unfortunately the supporting cast all fall into the same problems mentioned earlier. They're meant to represent opposing viewpoints but are never fleshed out as characters. The actors themselves, which include the talented Morgan Freeman and Cillian Murphy, don't deliver bad performances as much as they just play cardboard characters.

"Transcendence" isn't a film that's out to entertain its audiences, but rather to ask serious questions, yet it's hard to take the film serious at all, when the depth that it attempts to tackle only amounts to a shallow puddle.
Posted by Anthony Dominguez at 11:48 PM
Email ThisBlogThis!Share to TwitterShare to FacebookShare to Pinterest
Newer Post Older Post Home