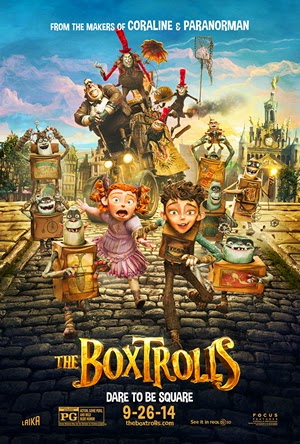 Delightful, quirky, and despite its darker atmosphere, charming, "The Boxtrolls" is the latest 3D stop motion, animated film animation studio, Laika ("Coraline" and "ParaNorman"). Fans of studio Laika's previous two films will be attracted by "The Boxtrolls" aesthetic but will still find something new and refreshing here.

Based on Alan Snow's novel "Here Be Monsters," "The Boxtrolls" takes  inspiration from classic, Victorian England in its visual style. The film itself takes place in the town of Cheesebridge, where the bureaucracy is obsessed with maintaining their own status and eating cheese rather than building children's hospitals.

Beneath the twisted alleyways and surface grime of Cheesebridge lies the hidden society of "Boxtrolls;" shy inventors that adorably derive their names from the discarded boxes they wear (e.g. one troll is called "shoes," because the box he wears depicts a shoe). Only leaving the underground caverns they call home at night, the Boxtrolls scavenge the city in order to find junk material for their MacGyver-like inventions.

The story begins when Archibald Snatcher (Ben Kingsley) approaches the mayor of Cheesebridge, Lord Portley-Rind (Toni Collete) and begins to spread false rumors that the Boxtrolls underneath the city kidnap and eat children. Rind ignores this and only begins to worry about the subject when Snatcher adds that Rind's cheese is also in danger of being stolen (the film's own rather dark and humorous way of showing the city's corruption).

From here, with impressive editing, the film shortly begins to weave two narratives into one; in a series of montages, various boxtrolls are depicted being kidnapped, while on the other hand we are introduced to "Eggs." Eggs (Isaac Hempstead-Wright) is a human being (who wears a discarded, cardboard box of eggs) that was raised by the boxtrolls.

While the boxtrolls are being kidnapped, we see the manner in which Eggs is raised. The use of intercut titles and the like, to let audiences know that years have gone by, are foregone in favor of using superimposition. Eggs is shown performing the same task from childhood and through the aforementioned editing, early adolescence. At the same time, the editing is also used to show the decreasing amount of boxtrolls within the cavern as they are kidnapped.

During an excursion to the surface, Eggs accidentally runs into Rind's daughter, Winnie Portley-Rind (Elle Fanning). Winnie's delusional impressions of the boxtrolls add an extra layer of grim to the film's already dark humor. In one scene Winnie dances with delight at the excitement and fear of meeting a boxtroll and being eaten limb from limb. It's not just the scriptwriting that works here, but the manner in which Winnie is animated. Facial expressions are vivid and complex body movements really bring characters and their lines to life. Dan Alderson leads the animation crew and having worked on not only "The Fantastic Mr. Fox," but also "ParaNorman" and "Frankenweenie," Alderson and his crew seem more than at home not only animating the film but being able to work with the film's aesthetic and humor.

After a few misunderstandings are cleared, Eggs and Winnie concoct a plan to work together in order to clear the false rumors surrounding the boxtrolls. Despite its short length of around an hour and thirty minutes, the pacing of "The Boxtrolls" never feels off. The plot along with a good number of sub-plots all wrap up rather nicely by the film's end without ever having seemed forcefully ended by the script.

On a final note, those patient enough to sit through the film's credits are rewarded with a meta-humor joke aimed from two of the supporting characters towards the animator, that's makes the credits more than worth sitting through.
Posted by Anthony Dominguez at 12:33 AM
Email ThisBlogThis!Share to TwitterShare to FacebookShare to Pinterest
Newer Post Older Post Home