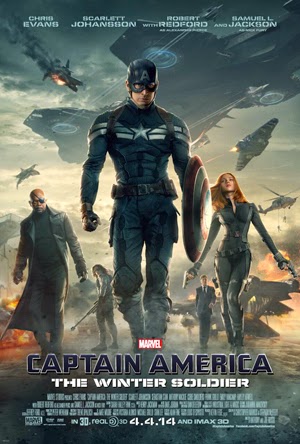 The film begins with the eponymous Captain America and a squad of S.H.I.E.L.D. agents, performing a covert ops mission to save hostages from a group of terrorists, aboard a boat vessel. Despite its focus on being more gritty and serious, "The Winter Soldier" still retains the sense of humor Marvel films are known for. The dialogue between the Captain and Black Widow (Scarlett Johansson) is rife with quips and the rest of the supporting cast come with their own repertoire of one-liners. The humor is hit and miss, and at times more serious moments within the film would have benefited from not having a one-liner interjected.

After an impressive feat of parachuting without the actual parachute, Captain America lands on the boat, and in the ensuing scenes the film distinctly sets itself apart from its other "Marvel Universe" film counterparts. James Young serves as the film's fight choreographer and here "The Winter Soldier" places a bigger emphasis  on martial arts rather than gunplay. The fights are reminiscent of Gareth Evan's 2011's "The Raid: Redemption" in that both are set on a smaller scale with fights focusing on feeling powerful and realistic. It's one of the films bigger strengths but at the same time  makes the gunplay battles seem massively underwhelming in comparison. The directing of the martial art scenes place the audience up-close and personal due to the shorter range while the gunplay battle scenes take place over a frame of longer distance and lack an interpersonal touch that the former retains.

Towards the end of the mission distrust issues arise between the Captain and Black Widow when its revealed that information regarding Widow's objective was withheld from the Captain. The roots for the film's more serious and conspiracy-focused story begin to play out here. "Captain America: The First Avenger" ends with Steve Rogers awakening from a hibernated sleep into the modern world. The theme of alienation within this modern world plays out nicely. Outside of S.H.I.E.L.D., Rogers has little to no role in the world and more sentimental scenes between him and an aged Peggy (Hayley Atwell) expand on this. It is this combination of a well-paced plot, well-choreographed action, and focus on characterization that give the film credence for attempting to break out of being another block-buster, genre film.

Given its length which runs a little over two-hours, "The Winter Soldier" does run into the problem of losing some of its steam after the first hour. The last half of the film focuses on a large-set piece battle with an emphasis on gunplay. It's the two weaker elements of the film but doesn't detract away from what the first half built up completely.
Posted by Anthony Dominguez at 11:53 PM
Email ThisBlogThis!Share to TwitterShare to FacebookShare to Pinterest
Newer Post Older Post Home