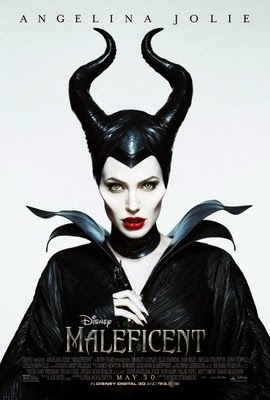 Where Jolie is able to fill the appearance of Maleficent in a way that it'd be hard to imagine anyone else playing the role, "Maleficent" suffers from a poor script that's never sure on how to tell its own story. The film begins with an introduction explaining the setting of "Maleficent" and here audiences are treated to a CGI "spectacle." There's really nothing too remarkable or fresh here. In an attempt to tell a more personal story and portray the "villain" of Maleficent in a more human light, "Maleficent" is constantly befuddled by its "grand" visuals.

The setting of "Maleficent" centers around the land of the Moors; a magical forest inhabited by wonderful creatures, and the bordering human kingdom. As a child, Maleficent (Ella Purnell) befriends a human boy named Stefan following an incident. As the years go by the two fall in love with another, but at the same time the current monarch, Henry, attempts to invade the Moors. There's no real reason established for the invasion aside from Henry being evil for the sake of evil, which is another problem the script suffers from. Events within "Maleficent" seem to happen for the convenience of the story.

The invasion fails and Henry promises that anyone able to kill Maleficent will be made into his successor. An ambitious Stefan takes advantage of his friendship with Maleficent and attempts to assassinate her but cannot bring himself to kill her; instead, Stefan takes her wings away and presenting them to Henry, becomes his successor. Stefan's assassination attempt is one of the more powerful scenes within the film but ultimately falls short. There's a sexual undertone behind not only Maleficent's wings themselves, but the act of Stefan tearing them away that could have made for a more gripping scene, but is then ruined by overly-dramatic acting and uncertainty on how to exactly capture, frame and direct Maleficent's agony.

This is the turning point for Maleficent's character and from here she becomes "evil." Donning herself the "Queen of the Moor," Maleficent changes the lush, green scenery of the forest into a dull black. The Moor becomes isolated from the rest of the human kingdom and after another time-skip the character of Aurora is introduced. The now King Stefan announces a christening for his daughter and during the ceremony Maleficent arrives and curses Aurora; she does offer the King reprieve, however, and tells him that the curse can be broken by a true love's kiss.

It's hard to take the story of "Maleficent" seriously during moments like this. Maleficent's ascent to power and her subjugating of the Moor is only presented by a simple change in scenery; the character herself never does anything that would deem her evil aside from cursing Aurora (and even this, without giving too much away, is ruined).

Maleficent's name has etymological roots concerning "evil," yet it's never presented as such. In an attempt to have a more personal narrative "Maleficent" has simply switched the roles of good and evil between Maleficent herself and the humans that govern the kingdom. "Maleficent" suffers from too many different problems, and the film becomes another forgettable footnote in the myriad of CGI, triple-budget films of Hollywood.
Posted by Anthony Dominguez at 1:29 AM
Email ThisBlogThis!Share to TwitterShare to FacebookShare to Pinterest
Newer Post Older Post Home