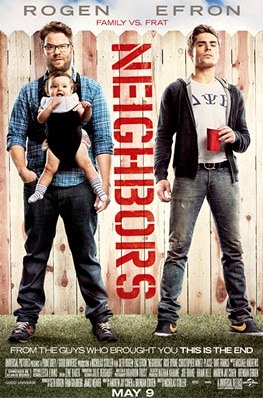 Chances are if you've seen "Superbad," "Knocked Up," or even last year's, "This is the End," then you've already experienced most of the punch-lines in Nicholas Stoller's new film, "Neighbors." Starring Seth Rogan and Zac Efron, "Neighbors" is about a young couple with a newborn daughter, whose idyllic, suburban life is ruined when a frat-house moves in next door.

Seth Rogan plays husband Mac Radner while opposite of him Rose Byrne plays his wife, Kelly. In a twist of irony there's a scene where Rogan and his co-worker sneak away from work in order to get high, and it's revealed that Mac is the most "mature" out of his entire group of friends. Despite having a wife, a child, and a house, don't expect Rogan to play the role of a mature husband, but that's part of the charm. Despite some of its crude jokes and recycled material, "Neighbors" has a hint of characterization. This comes in not only the form of Mac but also in Efron's character of Teddy Sanders. Sanders is the president of the Delta Psi fraternity but beneath the stereotypical, jock exterior, is a young man with a sense of self-awareness and fear of the future. Teddy isn't as smart as his vice-president Pete (Dave Franco), but he knows it. There's a mirroring between Mac and Teddy; for Mac, Teddy represents a life he must bid farewell for the good of his family. This means no more drugs, no more late-nights, and less alcohol consumption; for Teddy, Mac represents a "bleak" future. This means finally settling down and having a 9-5 job.

The pranks between neighbors may at first stem from a genuine want for revenge, but after a while it is clear that the pranks are being done in order to stem off insecurities that both Teddy and Mac harbor. Despite not being entirely focused on the romance between Mac and his wife, Kelly, it is an issue dealt with within the film. Before the fraternity moved in, the Radners' attention is fully placed upon taking care of their daughter. There's hardly any alone time between the two and where there is "alone" time, writers Andrew J. Cohen and Brendan O'Brien use it for some of the better punch-lines in the film. Byrne and Rogan mesh well together and whenever they're concocting the next prank, the two actors seem to be genuinely having fun with one another. Their believable performances helped to underline the problems that a newly married couple might face.  It's whenever "Neighbors" dealt with such real life issues in the form of comedy that it was at its strongest.

Another strength of "Neighbors" is the use of cameos in more minor roles. From Andy Samberg to the Workaholics-trio, "Neighbors" uses its cameos for roles that seem extremely fitting for the actors, adding a more subtle punch-line. Coming in, in the supporting cast of famous people are Lisa Kudrow and comedian Hannibal Buress. Admittedly both seem to play the roles they are most well known for; Kudrow being Phoebe from Friends and Buress being his stage persona.

"Neighbors" was at its weakest whenever it depended upon more of its crude humor.  While there may be some humor in these jokes, it seemed unbefitting of what the overall film was going for. These were the times when it felt like "Neighbors" felt the need to live up to its predecessors rather than stand up on its own, like Stoller's first film "Forgetting Sarah Marshall."

While comedy films aren't exactly known for their plot, another problem with "Neighbors" is how easily the story comes apart. The premise is about a couple who can't deal with the loudness of the frat house next door, so a prank war ensues. Calling the police didn't work either, but the issue here is that at times its hard to suspend the disbelief that out of the entire suburb, only one couple would be bothered by the frat house. The beginning of the film also shows a different couple moving in next door with their own baby, so it's a plot hole that the script itself acknowledges.

For as much characterization that Efron and Rogen's character receive, Byrne's character is shunned. Kelly spends nearly as equal time as her husband on screen, yet the only hint at her character is that she's tired of the being the smart one in the relationship. It's a missed opportunity that could have furthered a few of the themes the script was aiming for.