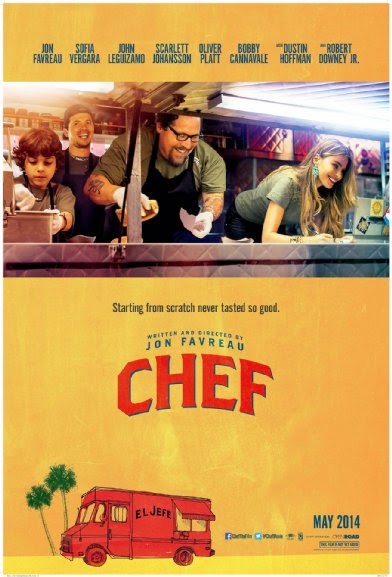 Films such as Federico Fellini's "8½" or the Coen brother's "Barton Fink" dealt with the struggles of being an artist and Jon Favreau's latest film, "Chef," is no different. The word "artist" covers a broad spectrum of different people, and a chef is just one of them. Whether it's making a Cubano sandwich or frying tostones, Favreau frames the various kitchens and food in a manner that would make it difficult to argue that making food isn't also an art form.

After a string of high budget films, ("Iron Man," "Cowboys & Aliens, and "Iron Man 2") Favreau's "Chef" is much more low-key. The theatrics and special effects of his previous films are traded in favor for a film on a smaller and more personal scale.

The story begins when L.A.'s most popular, food critic, Ramsey Michel, (Oliver Platt) announces that he'll be attending the restaurant at which Favreau works at. Favreau himself plays the main character, Carl Casper, and problems begin to arise when Casper enters a heated argument with his boss, Riva (Dustin Hoffman), over what should be the night's menu. There's a struggle for power here; Casper is not only admired by his kitchen staff with whom he's close to, but he's also the head chef. Riva, on the other hand, pays for everything in the restaurant and is Casper's boss. The dynamic between writer and producer that's seen in "Barton Fink" is taken outside of the Hollywood office and instead placed inside an L.A. restaurant kitchen. Casper wants the menu to be more experimental and flavorful while Riva wants the menu to be the same food that's been selling, because he can't afford risks.

Casper eventually quits and after goading from his ex-wife, Inez (Sofía Vergara), opens up a food truck. This is where "Chef's" story truly begins. The beginning of the film is set in a manner that allowed Favreau to tackle themes that would play out through the rest of the story. The struggle of the artist is there, but there's also the struggle of Casper attempting to bond with his son, Percy (Emjay Anthony). Casper is at odds with overcoming the generational gap between himself and Percy and Favreau highlights this through Casper's ineptitude of dealing with modern technology. Despite taking Percy to the movie theater or an amusement park, Casper is never really "there." Later on when Percy is teaching his father how to use Twitter, he comments on how he's glad the two can finally do something together. It's executed in a simple manner, but it's heartfelt. While the middle part of "Chef" is never on a shortage of cooking scenes, the story is much more about a father and son finally getting to know one another. The chemistry between Favreau and Anthony make it so that the two are inseparable from their roles. There's nothing that comes off forced here, and the two are comfortable with one another. The genuineness that comes with these scenes help to add to the film's sincerity.

While the beginning of "Chef" is set exclusively in L.A., the rest of the film takes place across the southern border of the United States. Casper's food truck serves its first customers in a Miami parking lot before driving back west in order to make the trip home. Unfortunately, whenever "Chef" is on the move the narrative becomes repetitive. Entry into a new city means that a montage of shots plays out over culturally distinct music (be it New Orleans Jazz, Blues, or Salsa). Given the film's duration which Favreau uses wisely, it's understandable why cities are relegated to such a manner, but it's something that could have been avoided if the use of montage had not been constant.


Despite this "Chef's" shortcomings are far and few between. Food lovers who watch "Chef" will be satiated by the amount of detail that went into the preparation of meals but "Chef" is more than just a film about food. It's a film that revels in its simplicity, although there isn't anything wrong with that.
Posted by Anthony Dominguez at 11:53 PM
Email ThisBlogThis!Share to TwitterShare to FacebookShare to Pinterest
Newer Post Older Post Home