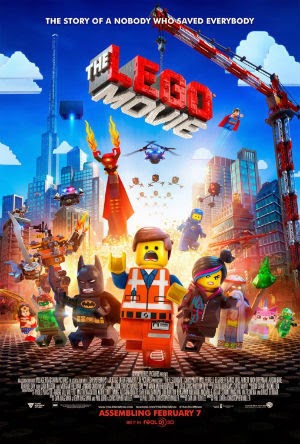 Despite its appearance that appeals to a younger demographic (the "recommended" age being 8-13 as the film puts it), "The Lego Movie" has something for everyone. A combination of classic dystopian novels,  modern pop culture (Batman, Han Solo, and Gandalf just to name a few characters), and its own blend of originality, "The Lego Movie" captures the awe and epicenes of playing with toys as a child, yet has a more subtle, underlying message that never feels too heavy-handed.

The film begins with a battle between the wizard Vitruvius, and the Lord Businessman and right away its clear in what direction the film is aiming for. The stakes of the battle are huge yet the script isn't so serious to not include a few clever wordplays, and more silly moments. Likewise, the action scenes later on in the movie are as over-the-top as it can get (A pirate with only a head pilots a gigantic robot body armed to the teeth). The scenes are cool, and the martial art movements of the Lego figures are all but we imagined ourselves to be doing with our own toys. "Violent" wouldn't be a word to describe "The Lego Movie" however. The action is always presented with a bit of comedy and never in a manner that might indulge too much in itself. It's a movie kids movie through and through.

Once the battle is over we are introduced to the main character, Emmet Brickowski (voiced by Chris Pratt). Brickowski is an everyman who works as a construction worker and is marked by his distinct love for the city in which he lives in and its rules. It is in this scene that the more "mature" themes of the film come out with a musical number titled "Everything is Awesome!!!" To the audience it's clear that the utopian appearance of the city is anything but utopian.

During the afterhours of his job, Emmet encounters Wyldstyle. Marked by her multi-colored hair punk-like, tough attitude, Wyldstyle is searching for the Piece of Resistance; a tool which would stop Lord Businessman's plan. An incident follows and Emmet finds the Piece of Resistance causing the prophecy to be fulfilled. Emmet is turned from an everyman into the "chosen one."

Emmet's blissful ignorance is a stark contrast to what the audience knows and this is used as comedy material. It's unbelievable to not only the audience, but the resistance that Emmet could possibly be this clueless yet be the "chosen one." Upon meeting the Master Builders (People who are able to craft anything), Emmet is awed by everyone's ability to build things ranging from spaceships to jets, yet he himself can only build a bunk-couch; a couch with two levels akin to a bunk-bed.

One of the bigger appeals of "The Lego Movie" is in its adventurous feeling. After his meeting with Wyldstyle, Emmet goes forth to stop Lord Business, but there are several stops along the way. The pacing never feels like it putters off, and each segment of the film has something going for it. We're taken through different locales and meet a variety of characters, filled with comedy and action that you've come to expect by this point from the film. The film does indeed follow a certain formula, but it's far from repetitive.

Charming, witty, fun, and genuine, "The Lego Movie" proves to be a contender for one of the best films of the year.