"How to Train Your Dragon 2" Review 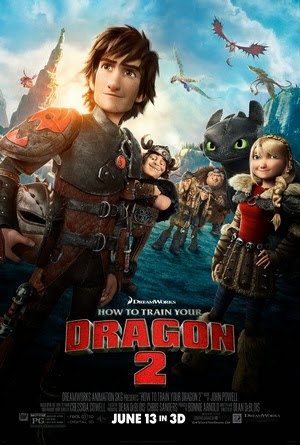 Taking place 5 years after the first film we're once again introduced to the small village of Berk, home to now both Vikings and dragons who live in harmony. Like in the first film, the union between the two species is the punch-line for a few of the repeating gags and jokes; Berk is now "fireproof--" fireproof meaning that the houses are now adorned with buckets that splash water below when pulled.

"Granted, it may not look like much," Hiccup narrates in detailing the film's initial setting yet "How to Train Your Dragon 2" is the year's most visually-striking animated film. Sat upon cliffs facing the ocean, Berk is distinct in its Viking-inspired aesthetic. Upon introduction to Berk, the eye is immediately drawn to the two carved statues of Viking warriors jutting out of the water's surface that flank the front of the village. Another shot later shows off the film's specific Arctic influence presenting an ice wasteland where the setting sun paints the desolate blue with a poetic red and orange.

Characters are brought to life both by the animation team but mostly their voice-acting. The film's original cast return and along with them come newcomers Cate Blanchett, Kit Harrington, and Djimon Hounsou. Blanchett initially accentuates Valka's alienated personality with a voice tinged with hesitation and joyful disbelief but later proves that she's also able to show the character's multi-faceted personality,  bringing out Valka's motherly nature as well as Valka's warrior-Viking spirit. Hounsou himself brings terror in the form of the film's antagonist Drago Bludvist. Bludvist, a Genghis Khan-like figure in appearance, is easily made all the more memorable by Hounsou's bellowing roar.

Dragons thesmselves appear more life-like and textured. More impressive, however, is the film's new dragon cast members. The fresh designs that stand out from one another ensure that the dragons are as much of characters as their rider counterparts. The largest dragon proves to be the film's best visual feast with the animators at DreamWorks showing they're more than capable of working with their newer technology.

Dean Deblois once again helm's the film as director and with a keen technique for camera movement, wonderfully captures the fantastical nature of dragon-riding. Hiccup and Toothless zip, glide, dip, and soar through the skies all the while Deblois follows them with a powerful momentum. It's during these flight scenes where "How to Train Your Dragon 2's" soundtrack is at its best. In one montage later on, Hiccup and Valka ride together. The track perfectly embody the emotions here--a long lost mother reunites with her son but once the formalities of the reunion are finished, the two give off an aura of always having been close friends. "How to Train Your Dragon" explored Hiccup's alienation from the rest of his Viking brethren but with Valka, Hiccup finds someone who too is free-spirited. The soundtrack in turn reflects that. The flight between Valka and Hiccup is playful, adventurous and even mystical in its portrayal of bridging human-dragon relationships as well as just bridging relationships between humans through the common interest in dragons.

For Hiccup, Valka, and the rest of Berk, dragons are more than just tools but close friends and even family--an ideology that Bludvist scoffs at who only sees the species as a means for war and dominance. Despite their differences, however, Deblois subtly emphasizes the strange similarities between the two. In taming dragons Hiccup tutors that a rider must show the dragons that "they're one of them." To this extent, Hiccup carries a gas and flame chemical combination which the dragons recognize as their own. In contrast, Bludvist tames dragons through sheer brute force. Dragon taming is a small ritual in its own right with Hiccup and Bludvist representing two sides of the same coin. Deblois also proves a master-craftsmen in creating  and building a world around dragons. For new character Eret, (Kit Harrington) dragons are a literal means of survival. As a dragon trapper working under Bludvist, the failure to capture dragons means death. Dragons within this franchise then are not only a social means by which characters forge bonds but also represent a monetary value as well as a militaristic one. At the same time, the characterization between Hiccup and Bludvist also reveal the dual nature of dragons themselves. They're creatures that have the ability to wrought destruction but are also creatures of grace, beauty, and camaraderie.

At its core "How to Train Your Dragon 2" is about struggling to find your own identity under the shadows of your predecessors. Hiccup is caught between the ideologies of both his father Stoic who wishes him to take over as village chief and his mother Valka who wishes him to become a Dragon hermit. It is through the film's narrative that a much older Hiccup is further characterized, the story being aptly appropriate for a cast of much older characters. While the majority of development is placed on Hiccup, because he's the main character, supporting characters get their share of screen-time and humor. Astrid returns as Hiccup's now girlfriend but the film never places the romance that initially budded in the first film into the foreground of its sequel. Where a typical screenplay would have involved a sub-plot revolving around the further development of their young-adult relationship, "How to Train Your Dragon 2"  alludes to their relationship rather than forcing it onto the audience. The allusions come in the form of the nuances of their body language, keeping the film well-paced without forcing additional narratives while simultaneously acknowledging the events and consequences of the first film.

Expanding upon the world and characters of the first film, Deblois presents a much darker story than its predecessor all the while retaining the adventurous spirit that made the first film so successful.
Posted by Anthony Dominguez at 4:05 AM
Email ThisBlogThis!Share to TwitterShare to FacebookShare to Pinterest
Newer Post Older Post Home