"Guardians of the Galaxy" Review 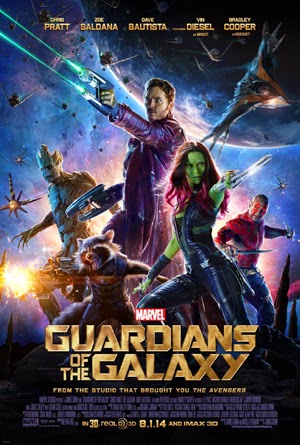 With a plethora of superhero mythos stories to gather from, Marvel Studios is in no danger of running out of fresh material for the cinematic screen. As of this writing there's currently six different franchises across ten films, including sequels and crossovers. "Guardians of the Galaxy" is the latest addition to the Marvel Cinematic universe with director and co-writer James Gunn bringing something new to the table while keeping loyal towards certain Marvel film conventions.

While the superhero genre is currently in a boom, 2012's "The Avengers" and 2013's "Iron Man 3" both pulled in profits of over $1 billion, the creation of "Guardians of the Galaxy" as a film is a risk in itself for not having an established popularity that its counterparts enjoyed beforehand. Gunn then has a lot to prove and while "Guardians of the Galaxy" is a bit rough around the edges, he's quite successful. Gunn himself is no stranger to superheroes, however, directing his own indie film "Super" a few years ago. "Super" itself twisted super-hero film conventions by having its story centered around an ordinary citizen becoming a caped-crusader, although the film came a bit too late with Matthew Vaughn's "Kick Ass" featuring a similar plot just a year prior. Despite this Gunn shows his malleability as both a director and writer in his latest film.

"Guardians of the Galaxy" begins in the late 80's with a young Peter Quill sitting in a hospital lobby. From the get-go Gunn establishes one of the film's original conventions that help it stand out from its counterparts. This is through the use of a diegetic soundtrack that's seeped in nostalgia. Quill is rarely seen without his cassette-tape player which houses what he calls the "Awesome Mix vol. 1." Following the death of his mother from cancer, Quill runs outside only to be whisked away by an alien spacecraft.  The transition between the somberness of the first scene and the absurdity of the second is a bit jolting given the extremity of tones between the two but soon afterwards the film finds itself pacing a bit more smoothly.

Twenty-six years later and Quill (now played by Chris Pratt) is an outlaw going by the name "Star Lord." What initially sets the scene for a dangerous mission on an unknown planet is soon shattered by Quill's comedic nature when he begins to play his Awesome Mix and dance, all the while fighting the infantile alien creatures that inhabit the planet. The comedy here keeps in line with what previous Marvel films have established by being similar in their light-hearted atmosphere yet are only similar to the extent that it manages to avoid seeming like a repetition of what its counterparts have already done. Despite being helmed and penned by a variety of directors and writers, there's an overarching style to Marvel's films which is consistent yet distinct enough in separating the films from one another.

Quill's mission is soon revealed to be the theft of a mysterious orb in which he obtains in a manner mirroring Indiana Jones' (a film which Quill himself references later on) own retrieval of the golden idol. Soon afterwards Quill is attacked by a group of alien soldiers led by Korath (Djimon Hounsou)but is able to make his escape. The seriousness of the action lends itself to the comedy of the film rather than the other way around. While "Guardians of the Galaxy" is a film that isn't without its sentimental moments, it's one where the characters don't take themselves or the situations around them too seriously.

It's aboard Quill's ship in which we slowly begin to understand him as a character. Despite being in a galaxy filled with advanced technology Quill's ship is adorned with a cassette-tape player equipped with speakers. "The Awesome Mix Vol. 1" is more than just a tool by which Gunn has set a style for the film but also a way in which Quill is characterized. Abducted at an early age, Quill missed a normal childhood and overall a normal life. Despite the adventure present in his life, the free-spirited demeanor of Quill hides the truth of a boy who misses his mother and life on Earth. "The Awesome Mix Vol. 1" and Quill's penchant for referencing pop-culture ("The Maltese Falcon" being another film Quill quips about) are ways in which Quill is able to hold onto his identity as a human being amongst aliens, all whom seem to detest him at one point or another. Coming from "Parks and Rec." then, it is no surprise that Chris Pratt is able to play Quill wonderfully, concealing the dualistic nature of the character until its ready to reveal itself.

After failing to sell the orb, Pratt is attacked by the bounty hunter duo Rocket Raccoon (Bradley Cooper) and Groot (Vin Diesal). Raccoon himself being a genetically modified Raccoon with a quick tongue and even faster trigger finger. Groot balances Raccoon's explosiveness with a child-like attitude, only being able to say the phrase "I am Groot," which communicates a variety of messages which only Raccoon understands. Both Rocket Raccoon and Groot are CGI and while "How to Train Your Dragon 2" holds my personal mantle for being the year's best animated-film, Rocket Raccoon and Groot are even more visually impressive. Both characters appear life-like and against live actors the two never seem out of place. With the animation and appearances being top-notch it then falls upon Cooper and Diesal as voice-actors to deliver a proper performance. Cooper brings a verbose as well as tragedy to the character which seems to be a pattern for the film amongst the rest of the cast. The Guardians of the Galaxy are a rag-tag group of unwanted heroes all with personal back-stories that slowly seep through the seams of their comedic appearances. Diesal even with only a few lines works in combination with the character's animation as well as the character's relation to the rest of the world in order to make Groot as charismatic as he is innocent.

Zoe Saldana as Gamora--an alien assassin sent to retrieve the orb from Quill--and Dave Bautista as Drax the Destroyer--a warrior turned prisoner--round out the rest of the Guardians. Bautista has the hulking (pun not intended) frame and deep inflection for Drax. The character is fearful as he is accidentally humorous. Drax's people are unfamiliar with metaphors and in one scene Drax delivers one of the film's best punch-lines, saying: "Nothing goes over my head. My reflexes are too fast. I would catch it." Saldana's character is reminiscent of Scarlett Johansson's as Black Widow, with both characters being female assassins, working in groups comprised of men. Unlike Black Widow, however, Gamora receives more characterization on screen and is thus is able to stand out more.

Standing in contrast to the heroes is Ronan the Accuser (Lee Pace). While there's nothing wrong with Pace's acting, the script leaves Ronan to be another forgettable footnote in Marvel's long-line of villains. Ronan is a political radical who, unhappy with peace settlements between his own people and the Xandarians, continuously terrorizes the universe. There's a political narrative at work here which the film slightly acknowledges. One scene in the beginning of the film shows the leader of the Xandarians attempting to speak with the diplomatic leaders of the Kree over Ronan's actions. Her pleas are ignored and the conversation is cut-short. In favor for being more light-hearted, the seriousness that backgrounds the film's lore is shunned. It's hard to believe that diplomatic relations between the two nations would be carried out in such a manner.

The second-half of the film, while entertaining, doesn't hold up as well as its first-half. At nearly two hours long, Gunn builds up the world of the film first before enacting out the actions that'll drive the plot towards it end. It is after this mid-point however that some of the film's flaws begin to show. In respecting conventions, Gunn still keeps a few that should be done away with. This ranges from clunky dialogue to events that are meant to invoke anxiety or fear yet fall flat due to the nature of plot-armor. One scene towards the films finale depicts a massive aerial dog-fight yet Gunn seems unaware on how to film things. Ships whiz by one another and lasers decorate the screen. There's a lack of cohesiveness as to what's going on and the dog-fight in turn becomes a visual mess.

"Guardians of the Galaxy" is an adventurous sci-fi romp through which James Gunn successfully brings an entry into the Marvel Cinematic Universe. With a cast of well-rounded characters played by actors who work off each other wonderfully, the film's more light-hearted tone is welcome but while "Guardians of the Galaxy" is fresh, in keeping certain conventions the film maintains a roughness that could be done away with.
Posted by Anthony Dominguez at 6:48 AM
Email ThisBlogThis!Share to TwitterShare to FacebookShare to Pinterest
Newer Post Older Post Home