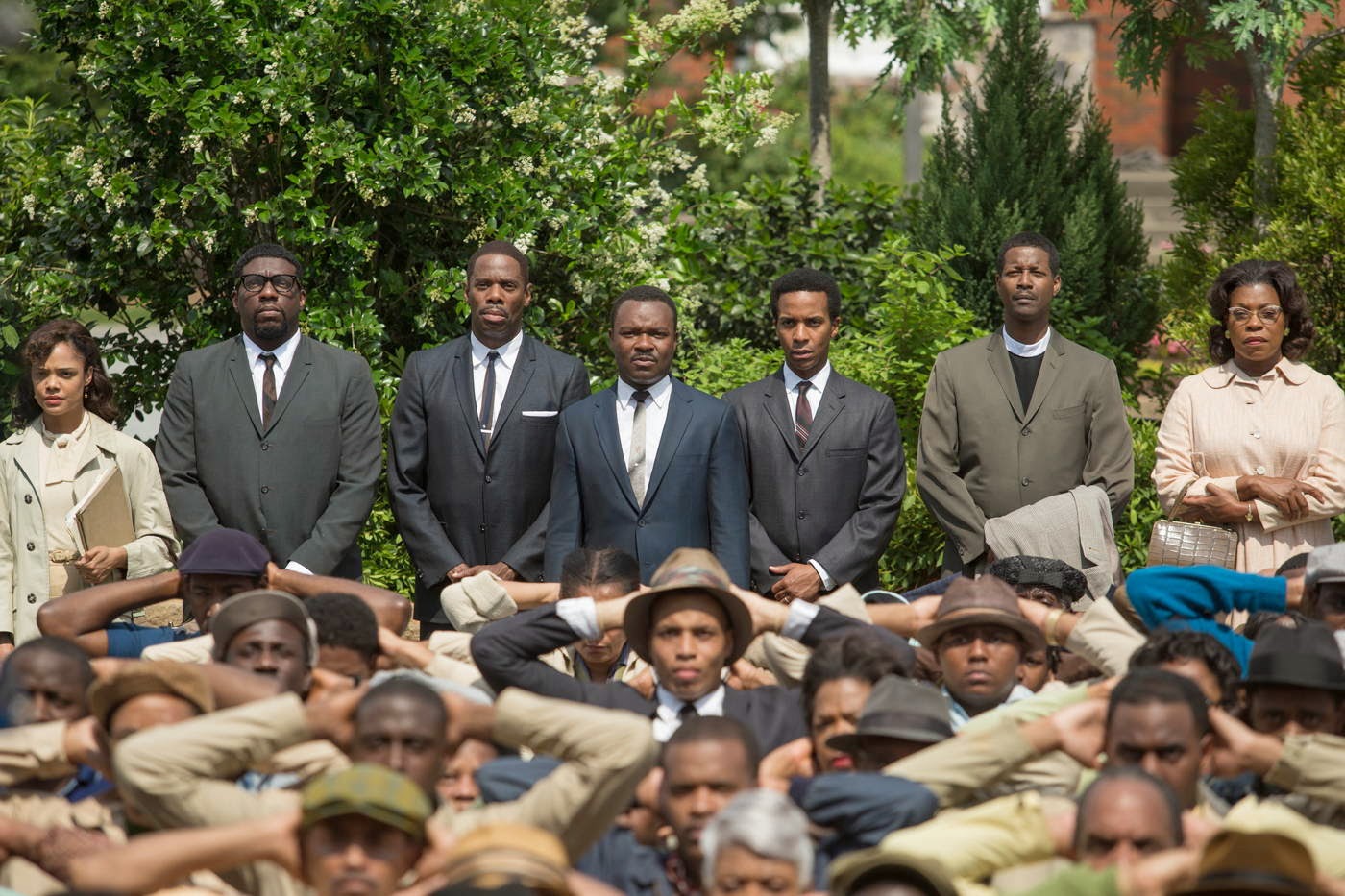 
In crafting "Selma," director Ava DuVernay approaches the film with a specific technique in mind, namely the use of still-images, which is supplemented by her slow and powerful camera-work. It's this use of the still-image that allows DuVernay to properly portray not only the racist political climate of the American south in the 1960s, but also the harshness of the Selma marches, which the film's plot is centered around. The film chronicles Martin Luther King, Jr's. (David Oyelowo) political campaign for equal rights in the south, specifically through what is now known as the "Selma March," a 54 mile march from Selma to Montgomery. "Selma" also examines the tumultuous political relationship between  then president, Lyndon B. Johnson (Tom Wilkinson) and King. While "Selma" doesn't explicitly vilify Johnson, it's more than difficult to take a liking to the ex-president. Johnson is a politician looking after his own interests first before those of his citizens that need his help most. King's requests for assistance in civil rights is impeded by Johnson's beat-around-the-bush speeches and political jargon. DuVernay wants to show that King's battle in leading the civil rights movement was fought on a two way front, with the American south and Washington being the respective battlefields, and she's successful in this. The various hardships that not only King had to go through but the rest of the African-American community draw attention to what a monumental feat that the passing of the Voting Acts Right was.  Last year, Justin Simien's "Dear White People" brought attention to some of the post-civil rights movement issues that African-Americans still face today. While "Dear White People's" setting was confined to a college-campus, Simien's film was one in which the small scale of the film opened a much broader macro-discussion on the race issues of today. In creating a fictional account meant to show real issues, however, Simien is never able to reach a political extremity that pushes the limits of cinema, one which the subject matter of the film called for.  This political extremity in combination with DuVernay's use of images is what makes "Selma" such a paramount film. DuVernay isn't willing to shy away from the worst of what members of the civil rights movement had to face, which makes for a portion of the film's most tragic moments, but it's these same moments which foreground not only why the Selma marches were so important but the civil rights movement as a whole. Innocent protestors are beaten by brutal policemen who have no qualms with taking a billy-stick to an older gentleman's head or a boot to a crouched woman's stomach. Hounds are set on crowds of people, hoses are used to violently cut them down, it's not merely the stuff of school textbooks but of actual history, brought to life, via the cinematic image.

The film opens with Martin Luther King, Jr. receiving the Nobel Peace Prize, but what's important is not the ceremony itself but what it reveals about King as a person. Before going onstage, King tells his wife Coretta, (Carmen Ejogo) that he's nervous. This is just one of the few ways that "Selma" goes about deconstructing King as a mythical figure. It is not that the actions of King are downplayed or that King as a person is slandered but rather, "Selma" is interested in portraying King as both the face of the Civil Rights Movement but also as the regular man behind the politics. King is held up to certain expectations by those that follow him and the toll that keeping his political image up to par takes, is shown. King's political life and personal life begin to intertwine against his will. The FBI wiretap his house, keep him on constant surveillance, and his wife is the victim of constant anonymous rape and death threats. The apex of this amalgamation of his two lives comes in the form of a scene where King is accused of being adulterous. Coretta simply asks him for a "yes" or "no" regarding the accusations but King doesn't respond immediately, and there's a heavy silence in the air. DuVernay focuses the camera on King's face and it's this shot that shows King at his weakest. Oyelowo plays the character with a multi-fastidiousness. His voice carries both a preacher's boom as well as King's boldness and humbleness. Yet in the aforementioned shot all that is taken away. Oyelowo portrays King here with an almost-crushed spirit, hinging between normalcy and a mental breakdown of everything catching up. In deconstructing King as a myth, DuVernay has quite possibly elevated King, even more-so, for portraying him as not just a political figurehead but as a human being.

Despite King being the main character of the film, the story of "Selma" is one that is as much about its minor characters, and the civil rights movement as a whole, as it is about King and the Selma march itself. Paul Webb and DuVernay pen the script with a hint of influence from the Italian Neo-Realists. More minor characters, such as the African-American citizens of Selma, are given their own smaller narratives. One example would be the portrayal of Annie Lee Cooper (Oprah Winfrey). Cooper is first shown early on attempting to fill out a voter registers form and subsequently being rejected on legal but racist and absurd grounds. Her appearance doesn't stop there and she can be seen in the audiences of King's various speeches, as well as being given more agency during one protest in front of the Selma courthouse, and finally appearing in both the initial Selma march which is unsuccessful, and the film's finale. The influence of the Italian Neo-Realist cinema is at its strongest here, during the film's portrayal of the successful Selma march. Reminiscent of Gillo Pontecorvo's "The Battle of Algiers," DuVernay splices footage from her own with film with actual newsreel footage of the Selma marches. DuVernay's technique here creates a poignancy which highlights the intimacy of the relationship between cinema and "real-life," one in which we come to understand cinema as not just mere entertainment but as a vanguard of both expressing ideologies and reflecting history.